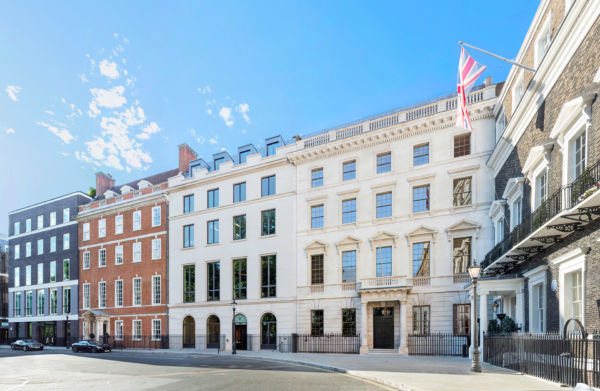 Combining contemporary design with traditional architecture, the Grade II* listed building sets new standards in terms of the superior craftsmanship and attention to detail involved in the restoration.

Designed in 1748-51 by Matthew Brettingham for the Earl of Strafford, 5 St James’s Square is considered to be amongst the best surviving buildings of its age and type in the capital.

Also known as Wentworth House, 5 St James’s Square was designed and built in 1748-51 by Matthew Brettingham The Elder for William Wentworth, 2nd Earl of Strafford.

The plan behind the building was derived from the Stranger’s wing at Holkham Hall, Norfolk where Brettingham was also working in the 1740-50s.

The palatial town mansion, overlooking St James’s Square, was refaced on its front elevation from Georgian brickwork to Portland stone in 1854 by the renowned Thomas Cubitt, who also added an extra floor and executed the French interiors on the first floor.

See our full range of serviced offices in St James’s